On day 3 after I was born, I was diagnosed with hip dysplasia in both legs, with the left hip being dislocated; so, I went straight into a Pavlik harness (which has a high success rate if diagnosed early). Yet after the prescribed three-months treatment, it was discovered that there were no noticeable improvements, with the left hip still dislocated. It was decided that nine days of traction was needed and after this they would perform a procedure to place the head of the femur into the hip joint. However, this also was unsuccessful, and so surgery was booked. After the surgery I was placed into a plaster cast. This was changed after 6 weeks, and unfortunately I suffered an unexplained grand mal seizure at this time. At the end of the casting, it was discovered that my bone had actually grown the wrong way; so again, more surgery was recommended to try and rectify the situation. 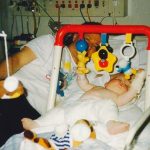 We had many other complications; so my parents had a hard choice to make. My uncle had previously died whilst under anaesthetic, and this paired with my unexplained seizure, was diagnosed as a malignant hyperpyrexia (which can cause an allergic reaction to anaesthetics). After 12 months of complications and treatments, the difficult decision was made that the best option would be to have no further surgery - until I was older and maybe have an epidural for a hip replacement. Then began our process of adjusting to normal life. 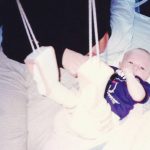 I grew up in a very supportive and loving family. There weren't many sports or activities I was able to do on a regular basis as I had trouble running, jumping, and even standing for extended periods of time - but neither I nor my parents would let it hold me back from being active and participating in everything I could. Eventually, when I was 12 years old, I got into the sport of swimming. I was classified as a Multi-class swimmer, as I swam with a disability - and just after my first year of competitive swimming, I made my first age nationals, and came home with 2 medals.

My swimming took off from there, and to this day I'm grateful to have achieved many things, from breaking the open Australian Record for the 50m Breaststroke in my classification; to swimming the fastest time in the world for the 2014 period, in the SC 50m & 100m Breaststrokes for my classification. I've been lucky to have been a finalist four times in the Norske Skog Young Sports Achiever Awards; I've represented NSW at the School Nationals, where I even got the honour of being Vice-Captain one year; and at the Pacific School Games, where I came home with my first two international medals; and I was awarded the prestigious NSW Blues Award, as well as a Sportsmanship award for my sporting achievements and attitude during my school years.

For me what's been most valuable in my own journey, aside from being blessed with all this, has been being able to meet so many amazing people and Paralympians, each with their own stories and inspiring journeys.

In 2016 I moved to Melbourne, where I train with the Melbourne Vicentre national squad. I got the chance to compete at the Olympic Trials in April, making it to the finals in both my events. And since then, it's just been the real process of early mornings and hard sessions. Outside of the pool, I still have pain and trouble walking, and I'm still kept awake some nights because of it. But in the pool, I can push past all that. I like to dedicate myself 100%, and no matter what happens, I am grateful for all the great and amazing things that have happened for me, and the people who have supported me through it all.

Early diagnosis is a very beneficial tool for treating hip dysplasia, but sometimes due to unforeseen circumstances, things don't always go to plan. There is hope! Sometimes in life things just happen, and for me personally, I've tried to not get into the mindset of being disabled or limited in any way, instead just seeing where it all takes me. I've swam with these amazing people; had the opportunity to train at such a high-level squad; been able to travel to many places all over Australia for competitions - and to be frank, I wouldn't change a thing.

HHA Note: We are thrilled to have Matt as a Healthy Hips Australia Ambassador. Thanks for being such an inspiration.